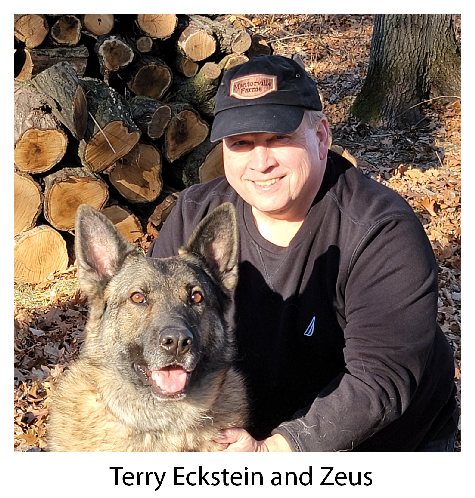 Hank’s stories can be read by the whole family, he never uses profanity and he writes so the reader can learn about life by experiencing the story, just as he has learned by writing about the experiences his family has encountered with their dogs.  The stories Hank tells are fiction, but they were inspired by actual events.  Although the stories are fiction, the message in the story is not.

Terry Eckstein uses his real name to write a different kind of story.

When he writes as Terry Eckstein, he writes stories about his career in human resource management.  During the fifty-year career, Terry had the opportunity to work for several different companies ranging in size from twenty person privately owned businesses to Fortune 500 companies with thousands of employees.  Although he writes fiction, the stories are inspired from actual events that took place throughout Terry’s career.

Terry grew up in a little northern Minnesota community where he attended the same public school from kindergarten through high school.  The small school provided him with the opportunity to participate in most sports and the fine arts; preparing Terry for the challenges of his future career.  Terry’s family owned and operated a small business in their community.  The family business presented him with the chance to have a job at the age of ten.  By the time he was a teenager Terry was interacting with customers, solving their problems and learning how to deal with different types of people.  This proved to be the perfect environment to prepare him for a career in human resources.

Terry attended the University of North Dakota, the University of Minnesota and Minnesota State University.  It took three schools, but he eventually received a Bachelor of Science degree in accounting.  Terry’s accounting jobs always involved human resources and as he worked his way into larger organizations Terry became a human resources professional, achieving certification as a Senior Professional in Human Resources (SPHR).

Terry was raised in a family with strong Christian principles and he lived his life according to those principles.  Many of Terry’s business decisions were based on his strong faith and his desire to live life in God’s will.  This all changed late in Terry’s career when he succumbed to temptation and committed the sin of adultery.  After committing the sin, Terry had placed a barrier between himself and God and in doing so lost the protection God had provided him throughout his life.  Terry not only lost his job and his standing in the community, but the woman he was with told her husband that the sexual relations were not consensual, resulting in Terry being charged with sexual assault.  He was arrested, jailed and eventually put on trial.

Throughout the three years wait to go on trial, Terry had trouble dealing with the barrier between himself and God.  Terry finally came to the realization that he was keeping the barrier up; not God.  When Terry confessed his sin of adultery and asked for forgiveness, the barrier came down and he was able to reestablish his relationship with God.  When the trial took place, it revealed facts that resulted in a mistrial and with all the charges that had been filed against Terry being dropped.

Terry is currently working on his first book about his life and career as an HR professional.  He expects to publish it in 2022.  He will also continue to write short stories using the pen name Hank Thorson and he will use the Hank pseudonym for stories that can be read by anyone in a family.

The stories Terry authors as Terry Eckstein are stories only suitable for adults because of the story subjects. Terry writes about the types of things he encountered throughout his career. Situations that included violence, sex and profanity; the things Human Resource departments do not talk about.

The majority of Terry’s stories will take place in and around Mantorville, a community he has come to love and cherish.